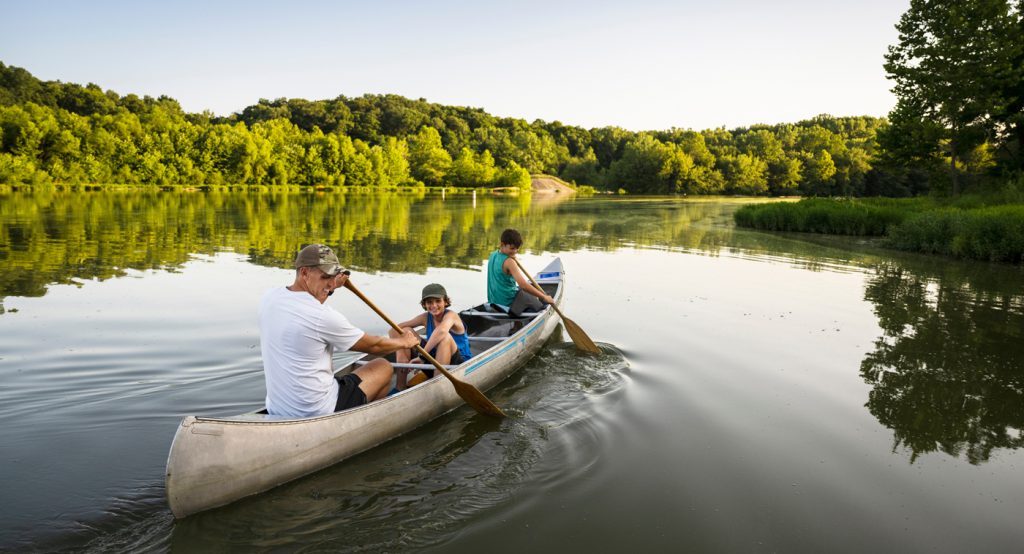 A canoe is a small, narrow boat that is normally pointed at both ends and open on the top. Capable of seating one individual, two, or many more depending on the type of canoe, these boats are most often propelled by paddles. There are many types of canoes, manufactured out of a variety of materials. The traditional canoes are made up of things such as woods, canvas and birch bark while more modern canoes take advantage of technology and are comprised of such materials as aluminum, Kevlar and synthetic substances.

The earliest canoes were carved out of large logs. These dugout canoes would take a long time to make but were sturdy enough to be taken to sea and used for such purposes as whaling. In Africa, a war canoe was a dugout canoe that was hewn out of a tall downed tree. These canoes could reach lengths of 80 feet and hold upwards of 100 warriors armed with weapons. The American Indians made birch bark canoes, using white cedar for the frame and the bark from a birch to cover it, holding the entire canoe together with tree roots and sealing it with a resin that they obtained from the coniferous trees where they lived, such as pines. The birch bark canoe’s much larger cousin was called a voyageur canoe and could seat up to 20 people as opposed to the two-person birch bark variety. It was constructed in the same manner but was longer and wider, able to hold cargo as well as people. In the late 1800s the wood-and-canvas canoe came into being, made by stretching a waterproofed canvas tightly over a wooden frame.

The modern canoe is normally built for no more than two people, but there are some larger models on the market. A type of canoe known as a touring canoe is built for one or two people and is made with the comfort of the occupants in mind, with plenty of room for cargo. The tripping canoe is a made in similar fashion but usually out of much heavier material. This kind of canoe can handle a bulkier load and they are typically 18 to 20 feet long. A wilderness tripping canoe is built so that it can contain large loads needed to sustain people for weeks in the wild while a river tripping canoe, 15 to 17 feet long, can be paddled in quick currents without tipping over due to its design. Various types of specialty canoes such as racing canoes, whitewater canoes, and outrigger canoes are built for speed.

The advent of aluminum was a boon to the canoe manufacturing industry, with the metal being mixed with others such as magnesium and silicone to create malleable alloys that canoes could be constructed from. These canoes do get cold in the winter months and heat up when the weather turns warm but aluminum canoes are still the most popular types on the market. The use of fiberglass in canoe making allowed these vessels to be built cheaply and caused them to be lightweight but canoes made of this material are not hardy and can damage easily. Kevlar is being used to make canoes; it also produces a light canoe but the material, which is utilized in bulletproof vests, is extremely strong and durable. This type of canoe is expensive when compared to other models. A modern material called Royalex has properties that make a canoe much more flexible and sturdy. Royalex canoes are heavier than other models and slower in the water but their toughness makes them attractive alternatives to canoes made of other materials.

How to Carry a Canoe