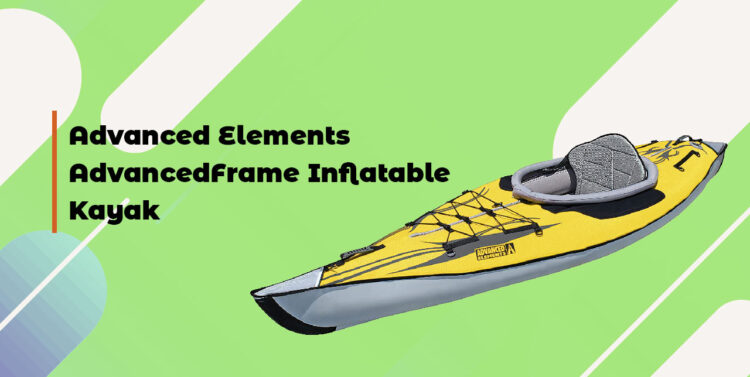 Strong, stable and steady, the Advanced Elements AdvancedFrame inflatable kayak is one of the bestselling, highest rated models priced under $500. With just the right amount of on-board storage space, this folding frame kayak is great for those who like to pack light and get on the water for a weekend trip.

Features of the Kayak

The Advanced Elements AdvancedFrame inflatable kayak is a folding frame model that sells for around $400. (It also comes in a tandem model for around $650.) This attractive red & grey model is heavier than most in its class of solo kayaks but it’s easy to maneuver and paddle. The AdvancedFrame can be used in salt water, lakes, and up to Class III rapids.

The air chambers of the Advanced Elements AdvancedFrame inflatable kayak are made of three layers of puncture-resistant material. The outer fabric is PVC Tarpaulin with 1000 denier polyester that encases a polyurethane-coated inner cover. It features an additional double layer of material, as well as welded-on landing plates on the bow and stern to increase protection against rocks and other hazards.

Since it folds down and can be stored in the trunk of a car, and then set up in minutes, the AdvancedFrame is portable enough for any quick adventure. It rides smoothly and tracks amazingly well in flat water thanks to its aluminum ribs forming the folding frame, which also gives it its distinctive kayak profile.

Some Notes from Current Owners

Reviewers universally praise the AdvancedFrame because of its value, performance, and reliability. They do caution that the kayak is not designed for long trips and big cargo loads, and that it seems to take longer for Advanced Elements kayaks to dry out at the end of the day than other inflatables. A few reviews also mention that potential buyers can skip the optional spray skirt since it doesn’t stay on well.

The Advanced Elements AdvancedFrame inflatable kayak has the aesthetic look of a hard shell and nearly paddles like one, yet it weighs only 36 pounds. This folding frame kayak is a nice affordable craft for campers, RVers, and anyone who likes the spontaneity of getting a 10.5-foot kayak out of a bag and putting it in wherever they go! If you are looking for an excellent recreational flatwater kayak for $400, this is the one.