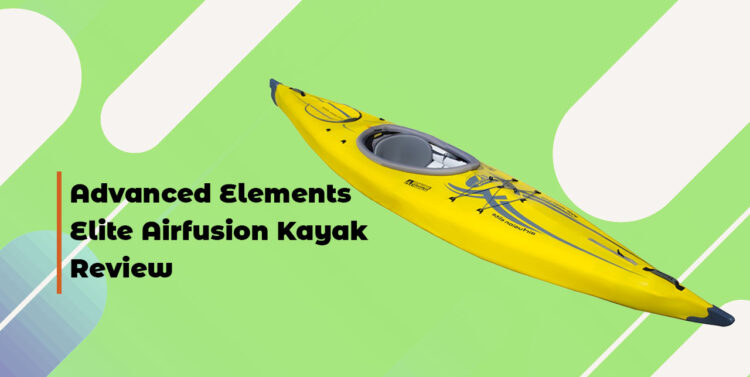 The narrow beam design of the Advanced Elements Airfusion kayak combined with its hybrid frame design rivals the speed and agility of a rigid hard-shell kayak.

Features of the Kayak

This is a folding fabric-skin frame inflatable kayak that sells for around $699. It features advanced inflation valves, bungee deck lacing, a rubber molded handle, d-rings, a mesh pocket, an adjustable foot brace, and its own backpack carrying bag. The Advanced Elements Airfusion kayak is covered by a one-year warranty.

At just 25 inches wide, the Advanced Elements Airfusion kayak is narrowest of all of AE’s watercraft. (The rest of the fleet measures 32″ to 35″ at the beam.) This streamline design, along with the lightweight semi-free-floating aluminum frame and 7 high pressure air chambers allows you to paddle it like a rigid hard-shell kayak. The hull material is heavy-duty PVC Tarpaulin which is extremely puncture proof. The solo Airfusion offers a maximum user capacity of 235 pound, and quick inflate / deflate times.

The speed of this inflatable resembles skin-on-frame kayaks but that seems to be its only advantage. Reviews indicate that it handles well once it’s in the water, but the Advanced Elements Airfusion has a longer set-up time because of the aluminum poles that must be inserted in the frame each and every time. Owners indicate that, if you aren’t careful, these poles can be bent easily, so doing this assembly when you’re excited and hurried to get on the water can be frustrating.

This is a new model from AE that may prove to be a miss for the company. The Advanced Elements Airfusion kayak is limited in portability like other IKs because of the length of the aluminum poles, but if you are storing the Airfusion in your trunk and not taking it on an airplane or trekking through the jungle, carrying the poles won’t be an issue. Another issue is that it isn’t as stable as a wide beam IK, and there’s no tracking skeg on the bottom. Actually, that’s a lot of problems to deal with for an inflatable kayak with a $700 price tag! We suggest you go with the Advanced Elements AdvancedFrame which you can simply unfold and inflate, and get on the water fast.