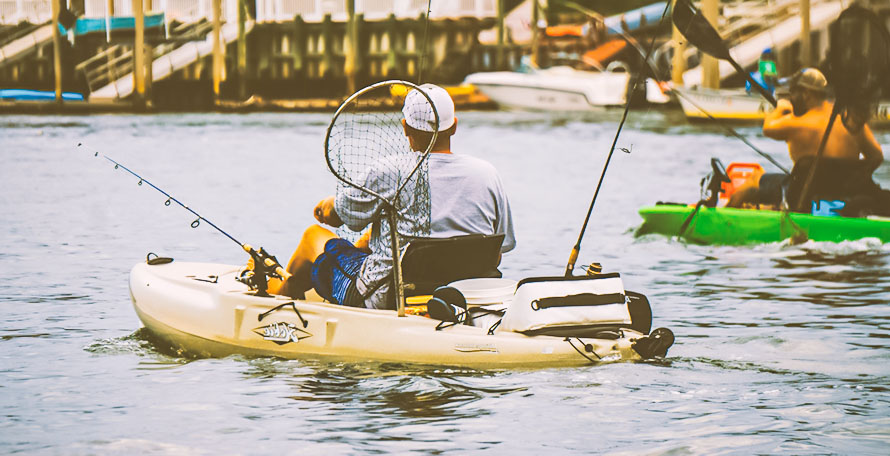 An Intro to Kayak Fishing

For those who did not know, kayak fishing is simply the act of fishing from the confines of a kayak. Since ancient times, the kayak has been a type of transportation that is used when one wants to spook the fish or stealthily approach the fish such as flounder and cobia. Fishing in kayaks is very popular mainly because it has a huge appeal and also as its cost of entry is very low. Over the last few years, kayaks are even used for sports fishing in both salt and fresh water. This is mainly in warmer regions, wherein entry is not at all difficult. Another reason behind the popularity of this type of fishing is that kayaks are relatively cheaper and do not require a lot of maintenance. Plus, they require smaller spaces to be stored and do not need a lot of prepping up to be launched.

Manufacturers of kayaks try to customize these boats to suit the requirements of fishing both as an activity and as a sport. These special models include additions like anglers, special hatches, inbuilt coolers and rod holders among many other attachments. For kayak fishing, the kayaks are modeled rotationally from polyethylene, because of their lower cost and durability. Most kayak fishermen try to look for kayaks that have comfortable and stable designs.

The latest version of twin-hull kayaks is very stable as they enable people to both paddle and stand while fishing. Other varieties of kayaks include those that are based on a foot mechanism and those that work on propellers or flippers. The best part about these kayaks is that they a facilitate hands free fishing and offer the other benefits associated with hands free fishing. Kayak fishing has seen a meteoric rise in its popularity in countries like South Africa.  In the south and north of Durban, a huge amount game fish are caught, include larger fishes like sailfish and marlin.

Majority of the techniques used in kayak fishing are pretty much similar to those used in normal fishing. The main differentiating factor lies in the setup of the equipment, like the way the each piece of equipment in used in a kayak or the way each activity is executed. Contemporary kayaks can be customized as well to fit the requirements of the owners by using fishing accessories like containers for live bait, rod holders, anchor trolleys, electric fish finders and many more. Most kayak anglers target coveted fishes like sea trout, tarpon, red drum, snook, cod and halibut. They also target pelagic like king mackerel, tuna, sailfish, marlin and amber jacks.

Jigging and bottom fishing can be easily done by using small boats, however, for effective trolling a speed ranging between five and ten knots was found to be necessary, which was certainly impossible by someone paddling. However, with the discovery of the fact that fishing can also be done at lower speeds, has increased the appeal of kayak fishing.  In order to lay game fish from their kayaks, some anglers launch their kayaks from larger boats that are offshore. The excitement lays in the pulling of the kayak by the game fish through the water. Yet another trend in kayak fishing is that it is gravitating towards inland waters like freshwater rivers and lakes, wherein game fishes like small-mouth bass, large-mouth bass, salmon, trout and muskellunge are targeted. This type of fishing has its own set of perks which are ease in the use as well as transportation, the affordability of the equipment, Eco-friendly watercraft and is filled with fun as well as functionality.

Things to Consider While Buying A Fishing Kayaks

Further, if people want to buy kayaks, it isn’t as if they have to search a lot. There are numerous stores in all places that sell kayaks of various kinds. People can get what they want, when it comes to kayaks. Also, they do not have to worry about the price, as most kayaks are pretty reasonably priced and are within the reach of most people. Alternatively, people can also hit the online stores to shop for kayaks, if they are serious about kayak fishing. Further, nowadays, kayaks are fitted with complete safety gear so that people do not have to compromise on their safety when they go out for fishing. Further, while buying a kayak, people should keep in mind that a long kayak is suitable not only for better movement but is also easier to push through the water. While people go on a trip for kayak fishing, they should keep their gear light. This is so as the heavier is the boat, the more energy is required to drag it. So people should travel light in order to provide their kayak with maximum mobility. Also, people should attach floats to all their equipment that they are taking with them so that their equipment is not lost in case their kayak capsizes is more.