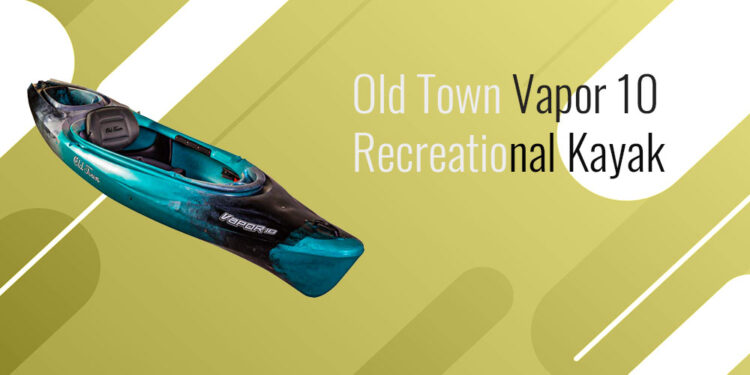 Old Town Vapor 10 Kayak is definitely one of the most sought-after entry-level kayaks that you can find in the market. In fact, it would not be far off the mark to say that Old Town has tried to outperform themselves with this kayak by making it look classy without making any kind of sacrifice on the quality front. Stability, durability, and affordability are the three core areas where Old Town Vapor 10 Kayak has outmatched its competitors. It is without an iota of doubt one of the best fishing kayaks on the market for still water angling. However, it is going to have a much tougher time on ocean water and fast-running rivers.

As much as we want to gloat about this model, it all comes down to price. At $289, you aren’t going to find a model with a ton of features, but Old Town equips it with some pretty nice barebone attributes. It not indestructible, but it’s made from quality materials. It’s not super comfortable, but it comes fully equipped with the needed padding. It’s not the most stable kayak afloat, but it can handle slow-moving rivers and still water just fine.

Seating: The Vapor is a SIK, with a low center of gravity, allowing you to paddle pretty much all day without too much strain. The seat itself is comfortable, featuring Old Town’s Comfort Flex padding, and is easily adjustable.

Compartments: This model has a Stern Day Well, which allows you to easily store and access your day to day items, without needing a hatch. You’re not going to be able to carry a ton of items, but a leisurely day at the lake where you carry a few necessary knick-knacks is definitely doable.

Construction: This is a 10-foot barebones model, but its constructed well. It only has a single layer, but it’s made of linear polyethylene which all high-end models are made from.

One of the really nice things that you wouldn’t normally expect from a kayak at this price, is its large cockpit area. It tracks “okay” on still water, and is stable enough, as long as you don’t pretend that it can handle white water rapids. Overall, it’s incredibly versatile.

Another huge positive is its size. 10-foot-long and can hold enough weight for you to bring equipment and a dog, without much fuss. There aren’t many compartments to store your gear, but you will be able to leave your gear in the cockpit area no problem.

Finally, the price. It’s one of the cheapest, polyethylene brand models on the market, and you will be hard-pressed to find a model this size any cheaper.

One of the biggest complaints about this model is the seating angle. While you won’t strain to paddle, the weight distribution has you seated too far backward, and it’s hard to make it work, even with a cushion to prop yourself up. Worse, there are no ordering options or replacement seats.

Tracking can also be a pain. If you get it moving, its maneuverability improves, but at first tilt, you won’t be able to paddle without it swaying side to side.

This is a versatile, all-around family kayak. It’s very cheap and is large enough to do most recreational activities, such as diving or touring, and you can set up the necessary rigging to fish. However, don’t confuse this for a model that can take on rapids, its maneuverability is substandard and it isn’t stable enough to handle faster water flows.