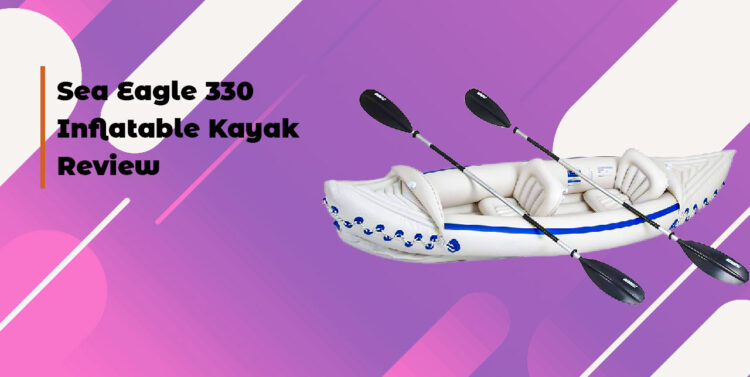 The Sea Eagle 330 inflatable kayak is a rugged little craft that will hold up to 500 pounds, yet weighs only 26 pounds itself. It inflates in about six minutes and you will enjoy the ease of launching this sport kayak in the water.

A Look at the Craft

The Sea Eagle 330 inflatable kayak has two molded skegs on the bottom for better tracking and speed. It comes in two packages: the Deluxe (specs listed below), and the Pro Kayak Package.

The Deluxe package sells for $249; the Pro package for about $50 more and that includes an upgraded set of inflatable seats with additional back support.

Though the Sea Eagle 330 inflatable kayak resembles a kayak and is called a kayak, it acts more like a raft when floating down a river. Don’t expect to emulate the paddle skills and boat lean that a hard shell sport kayak quickly responds to. It’s a better idea to treat this craft as a very comfortable, very wide, learning phase, novice kayak.

The Sea Eagle 330 is rated for class 3 whitewater but that’s a stretch. The 330 is not as rugged as some other inflatable kayaks and the skegs under the boat have been known to get damaged when hitting rough rocks. The skeg can rip at the seam and the kayak can get swamped at this weak spot.

Another point to consider is that owners of the Sea Eagle 330 remark that while this inflatable is rated for two people it comfortably fits only one. Plus, with the weight of two people and their gear, the kayak will have a lot of standing water on the floor further affecting its performance.

There is something of a design flaw with the inflatable seats as well. They sit in the bottom of the boat with no way to tie them down, unlike the Sea Eagle Explorer Series kayaks which do. Without some kind of bracing for your back and feet, you’ll experience some fatigue trying to maneuver and control the kayak.

Despite its drawbacks, the Sea Eagle 330 inflatable kayak can be a fun little craft for a novice as long as you don’t venture out into any water rougher than small riffles. However, if you want to save money with your first sport kayak, take a hard look at the popular Sevylor Inflatable Kayak that sells for much less than this one. Other options include a Stearns Kayak or the Advanced Elements Dragonfly both of which are good inflatables with reinforced bottoms.