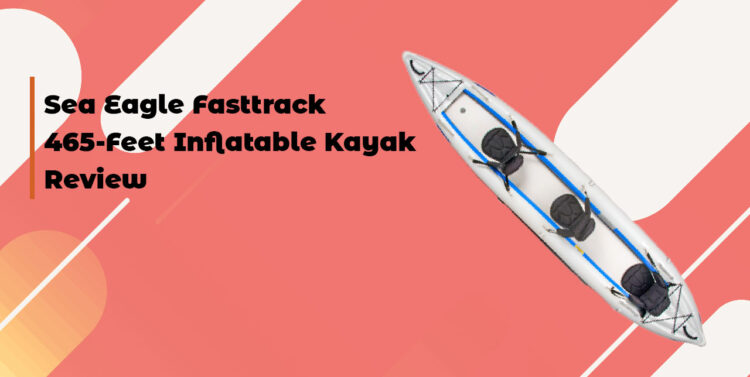 Released in September 2010, the Sea Eagle 465ft FastTrack inflatable kayak is a new design with exciting technology. This 14-foot canoe/kayak hybrid is more rigid and sleeker than any Sea Eagle yet produced, giving it the fastest tracking performance in open water of any of their kayaks.

The Sea Eagle 465ft FastTrack inflatable kayak is an all-new design featuring an outside drop stitch keel in the bow, plus an oversized skeg on the bottom of the stern. The keel provides added buoyancy to prevent the natural yaw movement (side to side rocking when using a double-end paddle on each side), thus increasing speed going forward as well as allowing the craft to plow over waves.

The skeg, which helps the craft track in a straight line, can be removed allowing the boat to be taken on moving water – up to Class III rapids.

Two Options for Fitting Out

Specifications on the Sea Eagle 465ft:

The separate high-pressure drop stitch floor increases the overall rigidity for safe, secure riding. In fact, the floor is rigid enough to allow the user to stand up and paddle! The material is 1000 Denier fabric with electronically welded seams. The rest of the features include two closable self-bailing valves, lots of storage space below the spray skirts as well as in the rope lacing, quick set-up time in just 8 minutes, and a portable weight of just 44 pounds.

If you have spent time reading a number of reviews, you likely don’t need to be sold on the value and quality of a Sea Eagle craft. Instead, you might be trying to decide if you should go with the new Sea Eagle 465ft FastTrack inflatable kayak or choose the Explorer Series 420x inflatable kayak. Let’s see how they compare:

A Swift Kayak for Still Water

Sized to carry three people or a payload of almost 800 pounds, the Sea Eagle FastTrack is excellent for family outings or hauling a lot of gear. The 465ft, which is the larger version of the 385ft model, is covered by a 3-year warranty and is backed with a 180-day money back guarantee.

If your plans include paddling for hours and miles, you will appreciate the swift profile and performance of the Sea Eagle 465ft FastTrack inflatable kayak. One last tip: go with the Pro Package to get the 18″ high backrest seats for optimum comfort and back support.