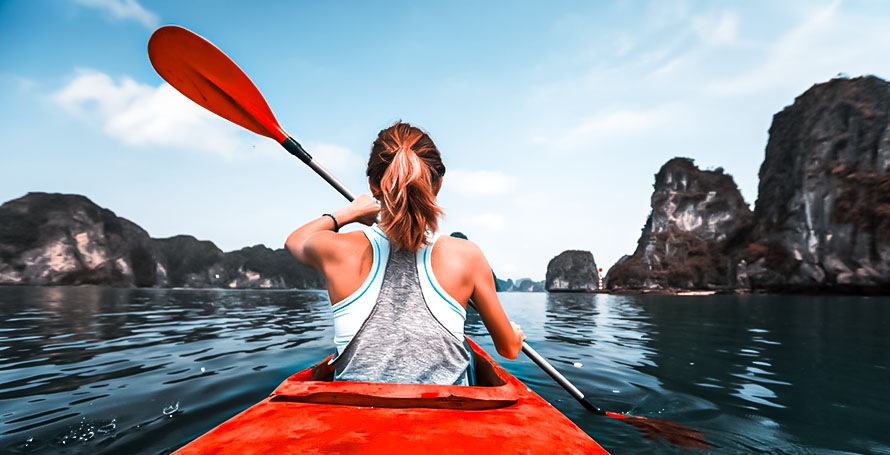 How to Make Your Kayak Blade Stick

Too often, paddling instructors teach a forward stroke that emphasizes pulling the blade through the water. This description leads to inefficient paddling at best, and is an outright wrong principle to follow at worst. In every forward stroke, you should plant the blade firmly in the water, and pull your hips up to that point. The difference between pulling the blade back or the boat forward is subtle but important. Think of your boat as gliding in a giant vat of molasses. Each stroke should stick in the molasses, so you have a firm blade to pull against. What happens if you actually strive to simply pull the blade through the water? You won’t get firm resistance on the blade, so the blade will slip, and you won’t be able to pull yourself as far.

This concept holds true for kayaks and canoes, and for every active stroke. Probably the best way to learn this technique is with sweep strokes. When you start practicing, check that your sweep strokes have good form. They should make a wide arc away from the boat, finish within inches of the boat, and maintain a blade angle perpendicular to the water. Most of this motion should come from rotating your torso, not from arm motion. The best way to maintain this technique is by watching your blade all the way through the sweep.

Once you have this technique in mind, try varying the type of pull you apply to the paddle shaft. Start with a yank on the shaft. Do you see how the paddle “misses” the water at some points, causing noise and bubbles? Most paddlers have this rushed style for their normal paddling. Now try a sweep that follows the same path relative to the boat, but try to make the blade stick at one spot in the water. This will probably be a gentle gradual pull resulting in a slower stroke. You should notice the boat actually turning faster from this slower stroke.

To practice this concept with your forward stroke, do some flatwater paddling alongside a series of fixed points like dock pilings, buoys on a rope, or even floating debris like leaves. You should be able to look down and monitor how much your blade is slipping with each stroke. The blade angle should be pure, perpendicular to the direction of travel. A video camera can capture this for slow motion replay and analysis. It is important to remember that the desired sensation is feeling resistance on the blade. Don’t think about moving the blade through a certain path. Instead, train your senses to feel how effective each stroke is. A great proponent of this approach is wildwater World Champion Luc Verger, a French racer who would often paddle blindfolded or at night to heighten his awareness of pressure on the blade.

Searching for the resistance on every stroke is the key to efficient paddling. This is especially true on aerated whitewater, where the blade is even more prone to slipping through the water, rather than providing a platform to pull against. The blade stick theory can provide the answers to many commonly asked questions about the length and speed of forward strokes.

The plant should be as far forward as possible, so you can pull yourself forward a greater distance. Extend the blade forward with nearly straight arms and torso rotation to avoid bobbing the boat. Don’t pull until the blade is fully immersed. Once the blade reaches your hip, you won’t be able to pull yourself forward any further, so that is the logical point to finish the power phase of the stroke. Simply increasing your stroke rate won’t necessarily make your boat go faster. To go faster, concentrate on pulling harder while keeping the blade stuck, then recover quickly to the next plant.

Sometimes paddlers are led astray by the positive sensation of having the blade stick. They discover that a firm feeling on the blade makes it easier to move the boat around, so they use a huge blade. This way the paddle definitely sticks in the water, but the paddler gets no incentive to work the blade to find the resistance. The “Big Bite Theory” doesn’t work…unless you already have flawless technique ingrained. A smaller blade is better. It will encourage you to search out exact blade placement for the greatest resistance on the blade. This is the reason most paddle blade areas are smaller than 128 sq. in. for canoe blades, and 116 sq. in. for kayak.

Developing good paddling technique demands that you explore some of the esoteric principles that make your boat move. Think about the advantages to good paddle extension, and getting your blade to stick. Build awareness of how the power is transferred to the boat, and which muscle groups are best suited to providing the power. Do some flatwater technique work, exploring the advantages and foolishness of paddling in a giant vat of molasses.