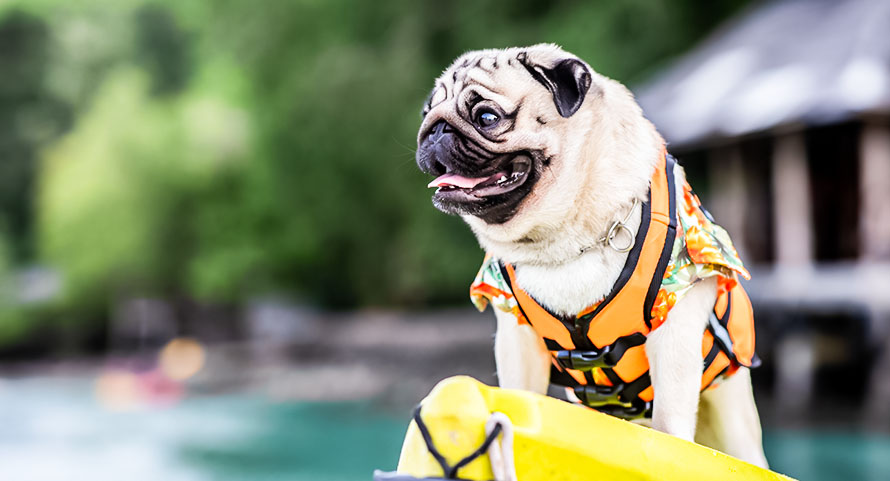 A great thing about kayaking is spending time on the water with friends. So don’t leave your best friend behind. Here’s how.

Dogs are born with the ability to swim, but it’s a good idea to strap your pooch into a doggy life vest. It’s also best to start your river dog early. Just like kids, dogs have to learn from their mistakes, says dog-loving drift boater Bill Lerch: “The first time we put Hoodoo in the boat he jumped right out. The water was ice cold, and he never jumped out again.” His other dog, Harley, rescued from the pound long after her formative years, was a different story. “She was a bad river dog,” Lerch says, “but she sure did love going.”

A stable and roomy raft provides a worry-free way to carry your best friend downriver. Train your dog to stay low, snug up his CFD (canine flotation device) and try not to flip. “Above all, don’t tie your dog in the boat,” advises Brian Chaffin of NRS. And be wary of cat-a-rafts.

A canoe is another great craft for a dog—though more nerve-wracking for the paddler. “If the dog shifts or gets exited you can go over,” says Katrina Williams, who treated her yellow lab Bonnie to a six-day float on Arkansas’ Buffalo River, 800 miles from their home in Tallahassee, Fla. “I had a special dog tag made with the name and number of a local canoe outfitter,” she says.

Many sit-on-tops kayaks are stable enough for a large dog to perch behind the cockpit, and the center hatch of a double kayak is a poochie paradise. You can get far from shore in these craft, so make sure your dog can get back onboard if he decides to chase flying fish into the deep blue.

Plenty of dogs follow their owners to the local playhole and coerce bystanders into endless games of fetch, but only a select few actually run rivers atop kayaks. One such pooch was Gary Barker’s Dawg, who eddied out in doggie heaven after running the meat for 14 years. Dawg’s secret? “He would alternate between riding on my kayak, swimming and running the riverbank,” Barker says. Dawg started as a pup on flatwater streams and gradually worked his way up to Class IV. Says Barker: “I never asked him to do Class V, but I’m sure he would have.” —jm