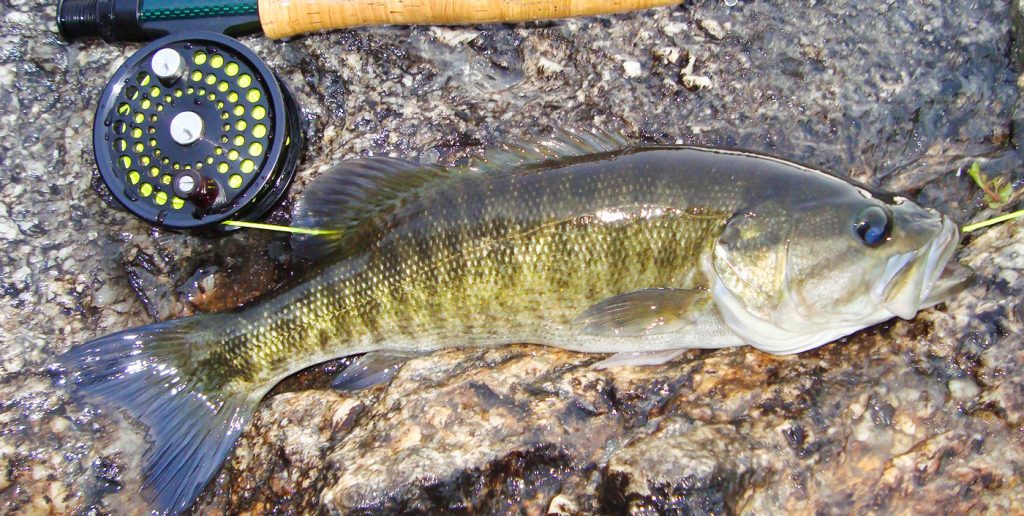 Shoal Bass On The Fly

Shoal bass are one thing, but shoal bass on the fly is something else. Fly fishing for shoal bass brings forth a different element to shoal bass fishing. It’s like fishing with conventional tackle while blind folded with one arm tied behind your back. The fly rod isn’t the most efficient weapon of choice for shoal bass, but it might be the most heart pounding for an already difficult gamefish.

Known for their hard fighting ability and powerful head shakes, shoal bass can tame the heaviest of bass fishing equipment. When fishing for big shoal bass, I go heavy. It’s the only way to level the playing field with those powerful head shakes. I normally opt for 7 foot medium to medium-heavy powered rods coupled with a baitcaster spooled with 30 lb braided fishing line, such as PowerPro.

Shoal bass, or shoalies as they are commonly called in Georgia river fishing circles, use their surroundings or environment when putting up a fight. Heavy current, rapids or sharp rock ledges are always in play and shoalies will let you know! I can’t even count the number of times a 4 lb shoalie has pulled me and my kayak through class II/III drops. Or, the number of times a monster shoalie has cut my line against a sharp rock, causing me to lose not only the fish, but my lure too! A monster shoalie will pull harder and fight wilder than a freight train on an eightball of meth! You’re missing out if you have never caught a shoalie!

Shoalies aren’t found everywhere and are limited to only a few river systems in Georgia. However, they can also be found in a few select feeder creeks and rivers in Alabama and Florida. Just don’t expect large numbers or huge sizes in those Alabama and Florida waters. What makes shoalies even more unique than just being found in a limited geographic area is the fact that they are only found in moving water. By moving water I mean rivers or creeks, not lakes or ponds. Unlike other bass species, shoalies can’t live in lakes or ponds.

Lucky for me, I live in the heart of shoal bass country. I hate to admit it, but one reason why I live where I do now is because of the close proximity to shoalies and the rivers they inhabit. A good life wasted on shoalies, I know. I find myself chasing those green and gold thigh shoalies year round, forgoing any sort of a social life for the chance of landing the shoalie of a lifetime. I guess I’m high on shoalies!

Recently I took a trip to one of Georgia’s infamous shoalie rivers in hopes of catching a 4 lb plus shoal bass on the fly. 4 lbs is doable on the fly, not monsterlicious, but a solid fish considering the Georgia record is a little over 8 lbs.

The conditions weren’t idea as I was faced with a high pressure system that brought 15-20 mph wind gusts and blue bird skies. Not the most idea fly fishing conditions, especially for a fly fishing newbie like myself, but I made due.

I left my Jackson Coosa at home and decided to wade a section of the river. Wading made the most sense because I wanted to concentrate solely on my fly casting. I didn’t want to worry about slamming into a rock while my eyes followed the forward and backward loops.

To get to this section of the river there is a short mile to a mile and a half long hike through the woods. I pulled into the trailhead’s parking lot and started packing my backpack with water because the 100 degree Georgia weather doesn’t play games. I didn’t want to pass out before making my first cast. I was there to fish!

Once I got to the river, the wind picked up and the gusts made it challenging to get the fly out. The high pressure system that brought those wind gusts didn’t help either, and I quickly found out that the shoalies had a case of lockjaw. I worked and worked the river with a streamer, 20 feet here, 20 feet there, but nothing. I started letting it sink deeper into the water column, hoping a hiding shoalie may see it and come out from under a rock to engulf it. That seemed to work and I picked up a few hits, but I ended up losing them.

Letting the streamer sink deeper caused more slack line to develop between the fly and my rod tip as the river’s current did what it wanted to with my floating fly line. This slack line made it more difficult to perform a quick strip set needed to drive the hook through the shoalies hard mouths. It didn’t take long before I learned to pay more attention to my line. Nothing like losing a few fish to get you on the right path!

I continued to work and work the river, moving towards the top of the shoals and hitting likely shoalie holding spots, but I still had a goose egg to show. Once I finally got to the top of the shoals the sun started making its downward descent in the western sky. Shade starting growing across the river and I knew what that meant. Shoalies will start easing out from hiding and will start aggressively roaming the shoals for a quick easy meal. Also, it meant it was time to switch to topwater to take advantage of their late afternoon food induced haphazardness.

I tied on a Rattlin’ Frog Popper from Rainy’s and it didn’t take long before it received some much needed shoalie lovin’. Pool after pool my popper was showered with shoalie kisses. MWAH! MWAH! Not the powerful jaw dropping explosions you see on T.V., but those subtle affectionate strikes that sometimes go unnoticed until you feel a massive head shake on the end of your line!

I worked my way back through the shoals and while I still lost several due to my awkward fly handling, I did bring several of those kissable shoalies to hand. Nothing big, dinks, but still fun and still on the fly! No 4 lbers, but I’m probably not ready for them on the fly just yet.

Shoal bass are one thing, but shoal bass on the fly is something else!