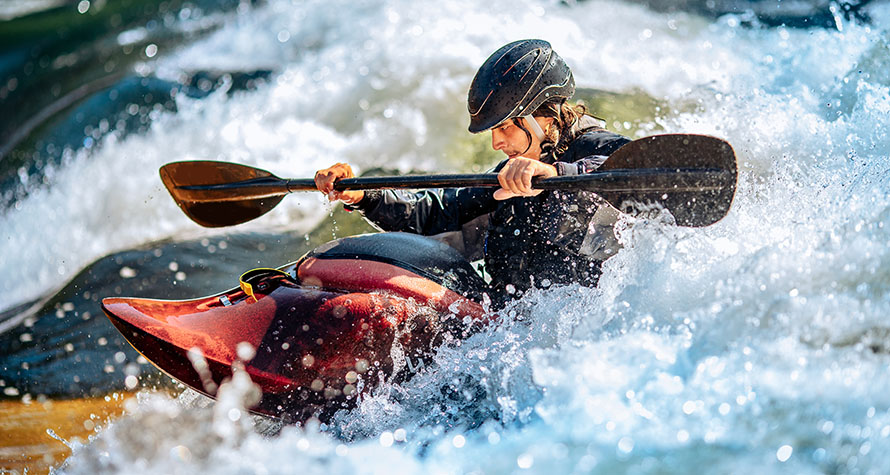 It was always easy for a rafter like me to have no envy fora kayaker. I can’t roll and I’m a little claustrophobic, so I never felt like I was missing out by riding the meat barge—until I’d watch a kayaker surf. A good surf wave embraces the surfer and puts time on hold, as if downriver flow was meant for the less enlightened—for rafters. But why not surf a raft? On purpose, for fun, I mean. Boat-flipping maytag sessions in a sticky hydraulic aren’t fun for most of us, but there are great, user-friendly waves out therefor rafters to play on just like the kayakers do. Raft surfing can also serve as a great training tool, as it teaches paddle teams about using current,manipulating weight distribution, and high-siding, not to mention forcing the guide to rely on the team and learn about subtle changes in ferry angle.

Guiding paddle rafts for seven seasons has given me the surfing bug and getting a good surf is more fun for me now than punching big holes. But getting to the point where I could successfully catch waves and stay on them took some trial and error. Initially, I watched kayakers turn upstream and paddle like mad, catching a wave and smirking as I drifted past. So I tried it that way, pointing upriver and whipping the team like dogs, only to blow past the wave with a disgruntled and exhausted crew. I even managed to dump an entire team this way—attempting to catch the first “surfable” wave in a wave train only to miss it and get hammered by the second one. The attempt to surf cost us too much momentum.

After paying more attention to kayakers and listening to some wisdom from a fellow raft guide, I realized that the key to raft surfing was the eddy. A catchable eddy in close proximity to the surf wave allows you to slow down, rest your crew and possibly return to make another try. The eddy serves as a launch pad for you to make your move onto the wave so, obviously, the closer the eddy is to the wave the better.

Pay Attention to The Waves

In addition to finding the right spot, with wave and eddy in workable locations, you need to determine if the wave is surfable and whether the spot is safe. How big is a surfable wave? Start small and look for single waves, not wave trains. Any wave much higher than the raft’s bow or stern is big enough to knock folks around or flip the raft. Surfing small waves is fun, and as your team’s surfing skills develop you can tackle larger ones.

How Fast Is the Water?

How steep a wave needs to be depended on how fast the water is moving through the wave. Fast water requires a wave to be steep enough that the raft will slide down its upstream face and not be dragged off of it. Less steep waves in slow flow are a good place to start surfing, and often very little eddy is needed to catch them.

A wave that gets steep enough to break in cycles or break continuously can be good for learning to surf because the breaking action provides better push down the wave face and holds the raft in the surf.However, make sure you are surfing breaking waves, and not dropping into sticky holes. Avoid spots with steep pour-over characteristics, and look for a wave with a smooth trough upstream that is long enough that the raft can slide down the wave face and not auger into the oncoming flow in an unplanned ender.

A wide wave will provide the longest surfs. The wave’s width makes it easier to avoid the down-river flow to the sides and stay on the wave,and its alignment perpendicular to the river’s flow won’t typewriter the raft across the wave and out into the downriver flow. Diagonal or lateral waves won’t hold the raft in a surf for long.

The guide’s ability to manage small changes in ferry angle is essential, and so he or she should always be ready to make quick and subtle adjustments. This requires that paddle power and weight be balanced side to side—keep tweaking the seating arrangement until the guide can focus on slight steering strokes, not big power pulls.

The crew’s fore/aft weight distribution and seating can make a difference, too. If the raft won’t make the drop over the wave’s crest and slide onto its face, move your heavier paddlers to the front of the raft. If the raft tends to ender in the upstream trough, put your lighter paddlers upfront, and if the problem continues, move paddlers out of the front one at a time until the bow rides over the water rather than dives into it. The team can fine-tune its fore-aft weight distribution by leaning forward or aft where they sit as well. This works well on waves that tend to cycle and drive the raft’s bow hard into the trough, producing an ender that can kick the raft off the wave—the team leans back to soften the ender, then leans forward to prevent being flushed downstream.

Work As a Team

To add to the fun and produce a better surfing team, designate a paddler in the rear of the raft on the opposite side of the guide to be the “offside rudder guy/girl,” who, on the command “Rudder!” will rudder/pry until the guide says stop. This helps the guide in situations where big draw strokes wouldn’t be enough to keep the boat straight on the wave.

Often, if the wave’s a good one, the team can get good side-surfs or spins into back-surfs, but the crew should know how to high-side, just in case things get wacky. And rather than muscle the raft through spins, utilize the current by letting the bow slide slowly toward the downstream flow at the side of the wave. Just as the current begins to drag at the bow, begin the spin in the same direction and keep turning until the stern drops down the wave face. Continuing to steer while back-surfing a raft is tricky, but works best with a cross between a gentle forward stroke and a high brace—the opposite of a rudder

A couple of final tips on gear and etiquette. While any raft can surf, self- bailers with a fair amount of rocker tend to work best for surfing, and you might find that a floor pumped stiff will provide better surfing performance, even though the manufacturers tell you not to do it.

And be considerate when surfing. Popular kayak spots may not be the best places. The wave itself might not be conducive to raft surfing, or the eddy may simply not be big enough to accommodate a raft and kayaks. Try to find your own surf spots where you don’t have to wait your turn.

If you really want to surf that kayak spot, here are some suggestions. Wait nearby for the spot to clear out. Usually, kayakers will see that you want to surf and wave you in—it’s often pretty good entertainment for them. If you can’t find a spot to wait, creep into the eddy if there’s room and ask if you can surf the spot—no, they don’t own it, but they’ll appreciate that you asked. If there’s simply not room or you’re not exactly greeted warmly don’t bother with the spot, there’s nothing worse than getting dragged by eddy current over local kayakers waiting their turn. And for a while you won’t be good enough to be a wave-hog, but at some point, you will be, so then give others a shot at it. And remember, have fun.