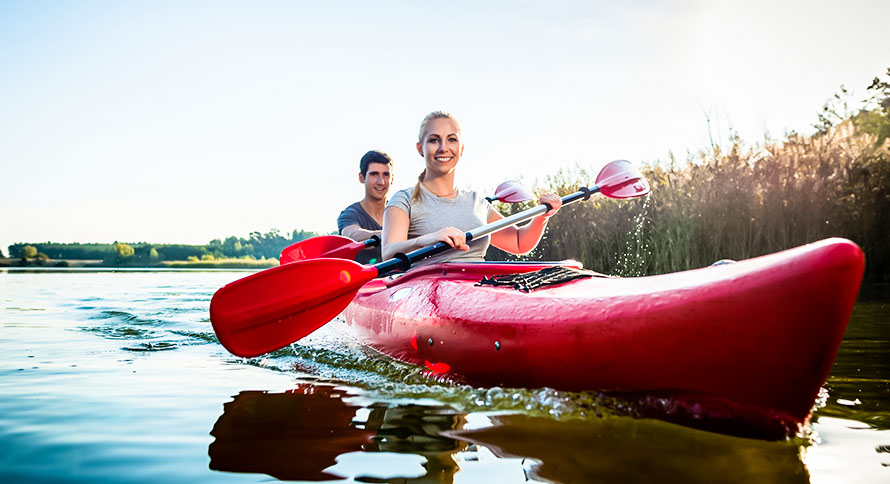 Rapids and Paddles don’t always mix. A case in point is one rapid where, after a tremendous thrashing, a certain rafter lost three Paddles. It was a previously unnamed rapid, but a logical name came to mind: The Three Paddle-Deal.

Then there are those rapids where Paddles flow with water as though the two were one. It’s a graceful sight to behold: Paddles moving up and down like a bird’s wings, steering the boat through intricate boulder-strewn rapids. In this day of mechanization and computerization, it’s comforting to know there’s a place for a sport where propulsion comes from nothing more than a pair of bladed sticks. Not all of these bladed sticks are alike, however. And how a Paddle behaves is largely a result of its ingredients. Wood is still commonly used, but increasingly popular are Paddles made of aluminum, or fiberglass and graphite. The following is a rundown of major Paddle manufacturers and their models.

Composite Paddles-made of fiberglass or fiberglass and graphite–are the most recent development on the rafting-Paddle scene, but the idea is catching on for several reasons: good flex, light weight, high strength and low maintenance. It’s an attempt to capture the best of both natural and synthetic worlds. Perhaps the greatest attraction of composite shafts is their flexible “spring,” which makes them less tiring to use. Their light weight also makes them easy to swing. The most sophisticated composite shafts are bi- directional. That is, the inner shaft consists of fibers running down the Paddle shaft; the outside layer, consisting of a long, single strand of fiberglass, is then wound around the inner core. The blades and handles of the Paddle are attached separately to the shaft.

There’s no question that aluminum isn’t as aesthetically pleasing as wood, but it is a workhorse. Paddles with heavy-gauge aluminum shafts and plastic blades are popular primarily because of their light weight and minimal maintenance. Aluminum Paddles, with their detachable blades, also allow the rower to replace a damaged blade or change blade widths. Shaft extensions (in one- foot sections) even permit the boater to lengthen the Paddle for changing river conditions or for different boats. And the break-down models allow easy transportation for fly-ins. Perhaps the greatest disadvantage of aluminum is its stiffness, which most boaters find tiring.

Wood is obviously the traditional Paddle material, and many boaters wouldn’t think of using anything else. Advantages of wood Paddles are their good looks and their comfortable flex in rowing. A high-quality wood Paddle is also extremely strong and resilient. Wood, however, is not perfect. Wood quality varies widely not only among species of’ trees, but among individual trees. And it’s not always possible to accurately detect flaws in its grain. Wood also has a tendency to warp in storage, and the better hardwood Paddles, such as ash, are somewhat expensive.