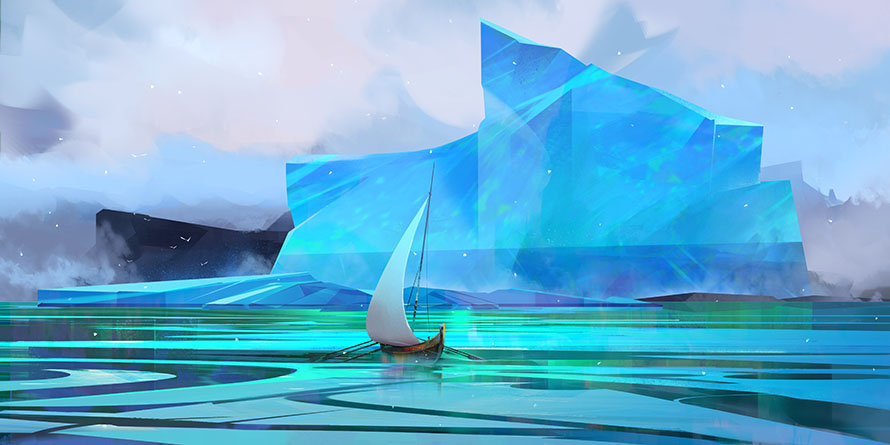 Greenland kayakers developed the planet’s greatest variety of rolls and related techniques as a matter of survival. Arctic kayaks were originally hunting tools in the quest for seal and walrus. The skin-and-frame boats paddled by Greenlanders were low profile—wonderful for avoiding howling gale-force winds and stealthily stocking prey – but easily capsized.

The successful kayaker not only had to harpoon his family’s dinner, but survive being capsized by large, panicked animals, entanglement by harpoon lines and return through the tempestuous Arctic environment. The 30 recovery techniques developed by Greenlanders include some for an injured paddler to roll up with the use of only one arm, or even without either arm. Other rolls use the harpoon throwing stick to right the kayak. A wet exit with no PFD in churning, wind-raked, 30-degree water miles from home was not an option.

Kayaking as descended from Arctic traditions may be one of the fastest growing disciplines in paddle sport. Where there is a group of sea kayakers there is usually at least one or two now using Inuit-style narrow-bladed paddles. And traditional technique is quickly becoming a magnet for those who appreciate simplicity, efficiency, precision and grace.

Traditional rolling is not violent; it is smooth and graceful. The “C to C” rolls standard in whitewater are frequently aggressive. Watch an expert Greenland-style paddler demonstrate rolls in slow motion. This “slow-mo” technique emphasizes the fluid, almost peaceful nature of the discipline.

Most traditional paddlers – especially those who have mastered a variety of rolls – move around in their boats, using their entire body. Early in my growth as a traditional paddler, it became apparent that being locked into one position in the cockpit would hinder my progress. Although many traditional cockpits are tight, they still allow for some leg movement along and against the masik (the deck beam supporting the front edge of the cockpit in a traditional, skin-on-frame boat). They also allow the paddler to hike himself out of the cockpit for sculling and other maneuvers. A snug cockpit that still provides for some leg, hip and foot movement is best. It enables me to execute moves that are impossible in kayaks whose outfitting restricts movement or is too loose.

There is a conservation of energy in traditional kayaking: Every move counts. Economy of movement, made possible in part by symmetrical, narrow-bladed paddles and versatility of paddle handling, yields low-energy use. Traditional paddlers must roll, maneuver and travel great distances in less-than ideal sea conditions. They know and employ paddling methods that use the least amount of energy possible.

Size does matter. Smaller, lower-volume boats tend to be easier to handle and roll. Low-profile boats give wind and waves less to push around. Of course, more volume may be useful for larger paddlers and for expedition purposes.

The symmetrical, narrow, double-bladed paddle used by most traditional kayak paddlers is a simple, elegant tool that provides for versatility, safety, efficiency, ease of use and excellent open-water performance. The paddles present little windage, are not feathered, and make it very easy for paddlers to use effective extended paddle positions for rolling, sculling and bracing. The natural buoyancy of the paddles also assists with side and chest sculls and balance braces—popular traditional techniques that allow paddlers to stabilize a kayak on its side to cool off, rest or just take a breather after a capsize.

There exists a world that is neither wholly wet nor completely dry. Greenland-style paddlers frequently operate not quite upright and not quite capsized. This in-between world, seen in such moves as the sculling brace, balance brace and chest scull, open exciting possibilities. One can rest, cool off and recover from a capsize by working on the side.

There are many ways to paddle a kayak. There are as many Greenland forward strokes as there are Greenland paddlers. This doesn’t mean that any method is OK. But it does mean that many common elements of traditional forward strokes, usually exist among most traditional paddlers. In other words, while incorporating some common elements, most traditional paddlers exhibit their own style and nuances. Becoming overly dogmatic about a precise stroke form, hand or arm position may actually reflect a lack of knowledge.