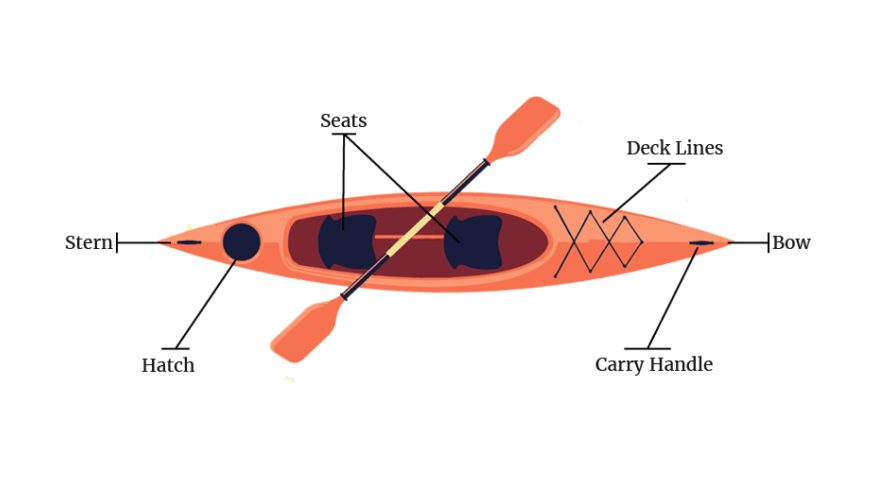 Different Parts of a Kayak

Before you start kayaking, you need to get yourself acquainted with some terminologies that are closely associated with kayak otherwise you will have a very hard time following instructions and can even make some life threatening mistakes in case of some emergencies.

To help you out, here in Kayak Manual we have listed some of the popular and widely used terms so that you can have a better understanding of the anatomy of a kayak –

The top of a kayak is referred as Deck. In majority of the cases, this Deck part does not contain too many accessories but if you purchase a Sea Kayak, things could be vastly different. Be it handles, bungees, hatches, cleats or seat, all these accessories are attached to this section of the kayak.

Don’t confuse the Kayak Hull with Boating Hull. In the world of boating, the entire body of a boat is termed as Hull whereas in the world of Kayaking, the bottom of the Kayak is known as Hull.

In simple English, Cockpit is the area where a kayak sits in. Compared to recreational kayaks, Sea Kayaks tend to have small opening to make room for the cockpit. Recreational kayaks usually have large area reserved for cockpit as it makes it easy for a kayaker to get in and out easily. Cockpit is usually placed in the middle of the deck.

The front end of a kayak is termed as Bow whereas the rear end of a kayak is called as Stern. The good thing about the two terms is that they are accepted worldwide regarding of the type of boats you are paddling.

As the name suggests, Grab Handle is used to move the kayak around. Usually, grab handle is attached to the front of a kayak but sometimes, it can be attached to the rear end as well.

Deck Hatch is used to store gears. They are usually included in the front end of the kayak but sometimes, they are found on both ends of a kayak. Water resistant cover can be used to close these Deck Hatches.

How you are going to secure things that you have placed in the deck of the kayak? Well, you need a shock cord to fasten items. Thanks to these shock-cords, now you will able to add some extra gears but make sure that these items are waterproof.

These two terms are extremely common and therefore, you need to memorize them at any cost. The right hand side of a kayak is described as Starboard whereas the left-hand side of the kayak is known as Port.

Foot peg is the term used to describe adjustable foot support that you can spot on almost all kayak types.