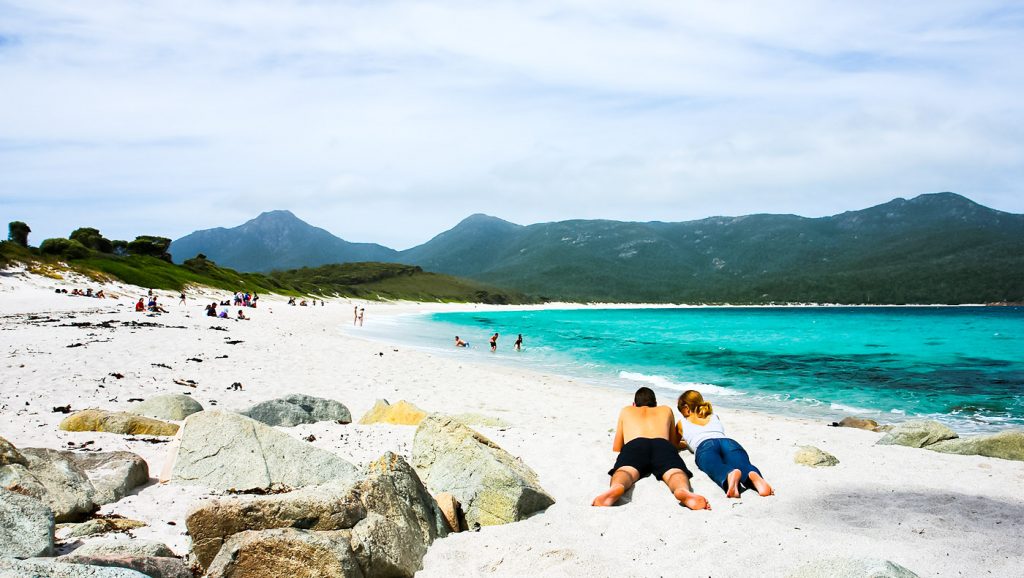 Freycinet Peninsula extends 30 kilometres into the Tasman Sea from the east coast of Tasmania, Australia’s smallest and only island state. On a topographical map it looks rather like a great arm desperately searching the sea for something that it lost. The Aborigines have gone, the whalers left with the whales and the farmers and stonemasons who hoped to find their fortune, didn’t and left as well. But for everything it has lost, Freycinet has retained that which makes it unique.

You can paddle the length of the peninsula, one of Tasmania’s first national parks, tracing the history of the place and the people who have come here, and gone again. A swift outgoing tide rips you toward the mouth of the estuary where river meets sea and the current meets the onshore wind. The result will be a wide expanse of shallow white water where the waves stand up stiff and rolling, and sometimes it might threaten to pitch you back from whence you came. You will have to pull hard and the kayaks will plough on punching clean through the spume and exiting drenched, blinking the salt away in time to witness the next monster crash onto the spray skirt. Water will start leaking through the rudder release and trickling over your thigh – a kayak is a terrible place to have an itchy leg.

A few more strokes and you will be clear of the bar, the water will change colour from gold to a deep blue. Before you will be Muirs Beach and the hook of Coles Bay dominated by a set of mighty granite monoliths known as The Hazards. Scientists reckon the granite was formed in the Earth’s belly 400 million years ago when the first plants were beginning to gain foothold on land, the most advanced animals were fish, and Australia was part of the super continent Gondwanaland. There was an ice-age (probably a few actually) and massive glaciations until it all inexplicably thawed out some 260 million years ago. The sea retreated leaving a floodplain and dense marshy vegetation. Things kicked off again 60 million years ago when the area was subject to massive seismic events lasting tens of millions of years. The entire peninsula was rammed upwards as other parts of the east coast subsided.

A couple more ice ages and half a dozen sea level alterations in the last million years and viola, geology has created a monument to itself. And it’s impressive. The Hazards rise more than 400 metres straight out of the bay, rosey-pink headstones of long-forgotten events. At the top they’re balding and eroded, smooth with great stands of eucalypts around the base spilling down to the water where we camp on a secluded white beach called Honeymoon Bay.

Let’s go back to the arrival of the first people on continental Australia some 40,000 years ago. Aborigines are believed to have crossed overland from what is now Indonesia, filtered through the then lush outback and finally spread as far south as Tasmania. About 10,000 years ago the world experienced several catastrophic flooding events, which saw sea levels rise up to 100 metres, cutting off Tasmania from the mainland with an enormous – though relatively shallow – passage of water now known as Bass Strait.

So began the longest isolation of any society in history. The Tasmanian Aborigines never managed to cross the strait, never bred with their mainland brethren, never engaged in war with anyone but neighbouring bands, never used boomerangs axes or dingos to hunt and only traded within their own confined culture. And because they were nomadic and food was relatively plentiful, even stone tools were abandoned. Without the pressing necessity of innovation, Tasmanian aboriginal civilisation remained unchanged, and perhaps even lost technologies previously developed. The small population lacked genetic diversity because they typically married within their language group, usually totalling less than 700 individuals. So by the time Abel Tasman arrived in 1642, the population was in decline. The diseases that were introduced from the ships destroyed frail immune systems and over the next few decades, thousands of aborigines died of respiratory conditions.

But Tasman never clapped eyes on an Aborigine, preferring to chart coast from a distance. And it must have been a great distance, for the feature he named Vanderlins Island actually turned out to be a peninsula. This was aptly noted 160 years later by the Frenchman Baudin who named it Freycinet after a couple of lieutenants he favored, and every other peak, bay and premonitory after mates back home he hoped to impress.

Unfortunately, Baudin had a run-in with the local aboriginal band, beginning a lengthy legacy of misunderstanding. By the time settlers arrived, the Tasmanian Aborigine was regarded with great disdain. There was a careless massacre at Risdon Cove, with the subsequent indigenous retribution and it was all on. In fact the story is one of the saddest tales of maltreatment and misunderstanding by a colonial power of any native people anywhere. In a grand finale the remaining population were rounded up and sent to almost certain expiry on an offshore island. Decades later there were less than 40 left, who returned to a settlement on the mainland and died to the man. In fact the only Tasmanian Aborigines alive today are the progeny of cabin-weary sealers who used to work Bass Strait and evidently stopped on the islands for a bit of R & R. Their descendents still live there, buoyed up with government subsidies, traditional hunting rights and the benefits of a greatly enlarged gene pool ever so kindly donated by the willing sealers.

The air should be cool and dry. Milky calm water usually laps against the granite outcrops cloaked in wiry she-oaks. The kayaks will cut through the sea like it is liquid Teflon, fine displacement waves peeling gently off the rudders. It was right here that Silas Cole burnt the aboriginal middens, or shell piles, to make lime for mortar. And you could clearly sense a certain prescriptive irony in the fact that the first act of the first settler was to torch the only significant trace of previous society, the accumulated detritus of 40,000 years of occupation, and sell the ashes for concrete to build their own houses.

Here was also the first whaling operation on the east coast 180 years ago. Whalers spotted Southern Rights and put out into the bay in small sailing boats to harpoon them in pursuits that often lasted for hours. After striking a killing blow with a square-tipped harpoon they would tow the 96-tonne whales to shore and slaughter them on the beach. Unsurprisingly, fatalities were common. The whalebone made ladies corsets and lamp oil was boiled from the blubber. The plunder was so intense that within 16 years the station had shut down. Tasmania had simply run out of whales.

Time to coast around Fleurieu Point and into a long Tasman swell rolling up the belly of Promise Bay. It’s easy paddling with a little help from the current. It will push you toward the hazy tip of the peninsula. You can now take a short jaunt to stretch the kayak-cramped legs.

One can walk clear across the peninsula at this point in little more than ten minutes. On the other side is Wineglass Bay, a deep sweeping beach of considerable length. In fact it is considered among the top ten beaches in the world, which would account for the Germans “ooo-ing” and “ahh-ing” and ticking it off their list. Fanning the imagination, it appears more or less the shape of a wine glass. But go back to the 1820’s and look again: a hundred or so Southern Right whales dragged up at stations at both ends of the beach and thousands of litres of blood filling the bay. The likeness may have been unavoidable.