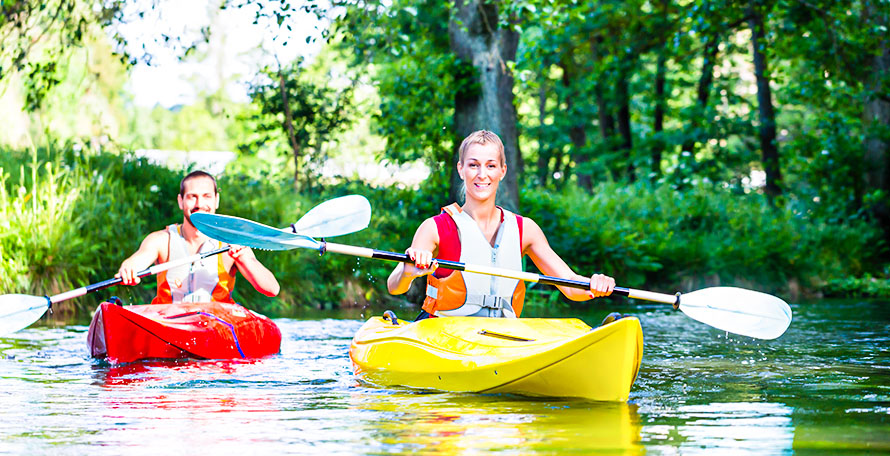 Whether you’re racing slalom or simply catching an eddy on a local river, there are three rules that govern how you should turn a kayak.

RULE 1: Your head and body should lead the boat in every turn.

RULE 2: Control your turns with strokes on the inside of the turn. If you want to turn left you should first get the boat spinning left with a sweep. Then determine the radius of the turn, your forward speed, how much you slide sideways—all with your left blade. Your right blade is used for forward strokes to help keep boat speed up.

RULE 3: Use a draw stroke to control your turns. It is this final rule we will discuss here.

First let’s learn what your paddle position should accomplish when doing a draw: 1) Control your turn; 2) Convert your forward momentum from one direction to another; 3) Harness spin momentum; 4) Harness the river’s energy.

What is a Draw

To learn the proper technique, grab a paddle and sit in a chair. Hold the paddle with your right hand only, and put it one foot from the side of your pelvis. Hold the paddle there and make it vertical. Face the paddle shaft (look in the direction of your turn). Rotate your body to face the paddle and your head. Reach over with your left hand and grab the shaft. This is a draw. Now look at where your blade is: Ooops! You’ve moved it forward. Get it back to your pelvis.

Now, while keeping the blade vertical and one foot from where the side of your boat would be, move the paddle up to your knees. This is a bow draw. Now move the paddle back one foot behind your butt and vertical; this is a stern draw. Is your paddle vertical on the stem draw? It should be.

Next look at blade angle. Remember that you are creating a centerboard with your paddle. What does a centerboard look like? It is parallel to the boat and vertical. Make sure your paddle is vertical, at your butt and that the blade is parallel to the boat. Now you have a centerboard for your kayak. The draw stroke is incredibly versatile and effective because you can use many different positions and angles to maximize boat glide and to convert forward momentum from one direction to another.

Different Elements of a Draw

There are several critical elements of the draw. The paddle blade must be at or slightly behind your center of gravity—your butt. Common Mistake: Putting the paddle in at the knee, or even slightly in front of center of gravity. The paddle must also be vertical. Common Mistake: Holding the paddle at an angle by keeping the top arm over the boat. If your paddle is at 45 degrees, 50 percent of your energy is used lifting the boat and 50 percent is used keeping the boat from slipping. The paddle blade must be parallel to the boat. Common Mistake: Opening the blade angle so the paddle acts as a brake instead of a centerboard. If you saw a sailboat with a centerboard near the bow, leaning over at a 45-degree angle and rotated out 45 degrees, you would say that centerboard was non-functional. Would you want a centerboard like that for your kayak?

Forget everything we have discussed so far, grab a friend and try this test. Have your friend face you and put his paddle on his deck. Now paddle up to his paddle and make a tight turn around his boat and back to the paddle on the other side. Your goal is to do this in a minimum number of strokes. Start counting the strokes when you cross the paddle on one side of the boat and stop counting when you cross the paddle on the other side. The average number of strokes is between four and five. It is impossible to do it in less than four without some kind of a draw stroke.

Now do the same test again using proper draw position. Remember that the draw is only a centerboard to keep your boat from sliding while it turns; it is not a primary turning stroke. Paddle up to your friend’s paddle and make your last stroke before you reach him a sweep to initiate the turn. Immediately put the draw in the normal position and glide around the boat’s stern. Now slice your paddle forward to the bow and pull yourself forward. If you do it properly you will be able to make the entire maneuver in one stroke. You will also have more forward speed after one stroke than you did with five strokes the old way. Every turn you do without a proper draw forces you to use four to five times the strokes needed and take more time to do it. This is not only inefficient, but also dangerous when you need to make a crucial move that includes a turn.

If after trying the above steps to perfect your draw—you don’t notice any major difference in your paddling, you are probably making one of two mistakes.

Always control the turn with strokes on the inside of the turn. The stroke for controlling these turns is a draw.