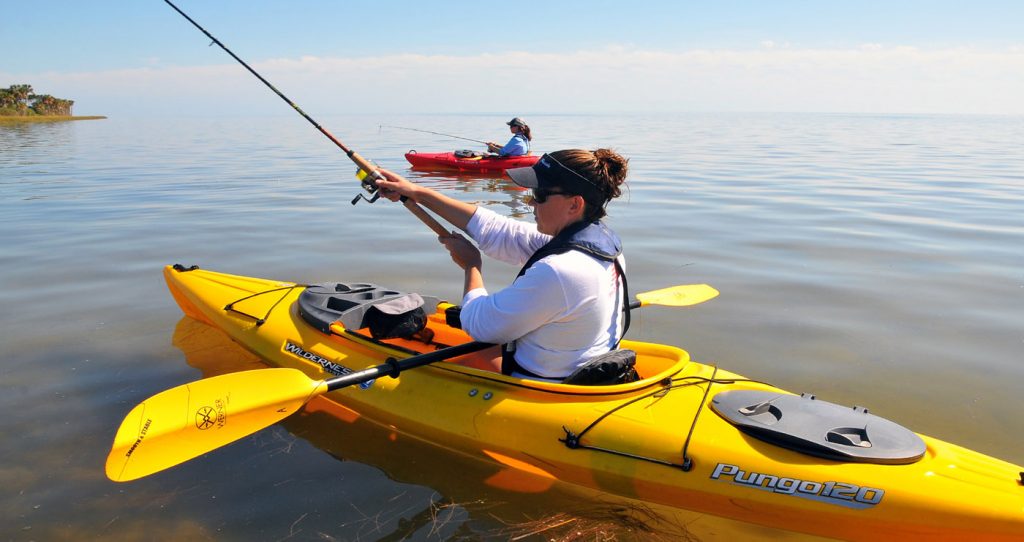 Prior to every kayak fishing trip, I go through an extensive mental list of gear that I can’t go without, and after several years of kayak fishing I’ve reduced the number of gadgets and tools found on my PFD and in my kayak cockpit.

Now one of my goals as I gear up is to take the least amount of gear possible. Why? I hate to fumble around the kayak as I try to fight, land or release a fish, only to find that my pliers are sitting under the net, tangled with the hawg trough and pinned under the seat by the boga grip.

As it goes with most activities in the outdoor world, less is more.This philosophy especially rings true in the kayak fishing world, where we’re constrained by limited space on our kayaks. Choosing the right tool for the job means making sure that it fulfills its purpose and is deserving of space on your kayak. Being selective will allow you to get on and off the water faster and ensure that you spend more time fighting fish and less time fighting your gear.

These days, you’ll find three to five versions of any accessory or tool that does the same thing. Cutting utensils are no exception; a quick search on Amazon reveals at least 40+ cutting tools, from snippers to pliers, shears to knives.

But which one is the best for you and how are they different?

The Science Behind Cutting

Cutting is all about having an edge, and strong materials hold their edge longer. The material of which the blade is made of makes a huge difference, as the ability of a tool to keep its sharpness is based on the hardness of the blade compared to what it’s cutting.

Another important factor is how they cut: Some tools cut by “pinching” the material between two pieces of the same hardness rather than shearing the fishing line. The rule in the cutting world is that you want to have the cutting edge made of a stiffer, stronger material than the material that is being cut or cut against.

Pliers are one of the most reliable and versatile tools an angler can pack in a tackle box.

The biggest advantage for pliers is how multi-purpose they are: They can help you tie and fix a lure, take a stubborn hook out, and reach into the fish’s mouth. Most pliers cut mono, braided line and even wire.

One thing to consider about pliers is that even though they are great at cutting all kinds of line (and even wire), their design – how they cut – is not perfect.

Pliers are typically made of cast or CNC aluminum, making them “rust resistant” (side note: you should always rinse your gear after use in saltwater). They work by having two tungsten carbide (one of the hardest and stiffest materials in the world) inserts. One has an edge and the other side is simply flat to allow a platform for the sharp edge to cut the line.

The con is that even when the cutter has no problem going through the fishing line or wire, the cutter ends up being pushed against a piece of the same hardness/stiffness, dulling the super sharp end after some use. Still, pliers are also inexpensive these days and the replaceable cutting blades are in most cases less than half the cost of a new set of pliers. You can’t beat the fact that they serve multiple uses.

Scissors and shears are another great option; unlike pliers, scissors don’t cut materials by pinching the line or wire, they cut by shearing the line through the two blades. Therefore, the blades remain sharper for longer, as long as the material being cut is softer than the blades. Aerospace materials have made their way into some of this products.

This scissors have blades made of ceramic (which won’t rust like typical scissors) and can go through braided line like butter.

Something to consider: If you go for scissors, you may still want a good set of pliers with you as they can help in more than one way in our environment.

Snippers are the simplest, most efficient tool to manage your cutting on and off the water. Small, rust-resistant and reliable, their functionality is their main advantage. About the size of a top water lure, they can be hung on a PFD and used with ease with their retractable lanyard.

As with everything else, they have a con. Since they only serve one purpose, bringing them forces me to add back to my gear list.

Experience and experimentation with a wide array of options has allowed me to learn the ins and outs of each option listed above.