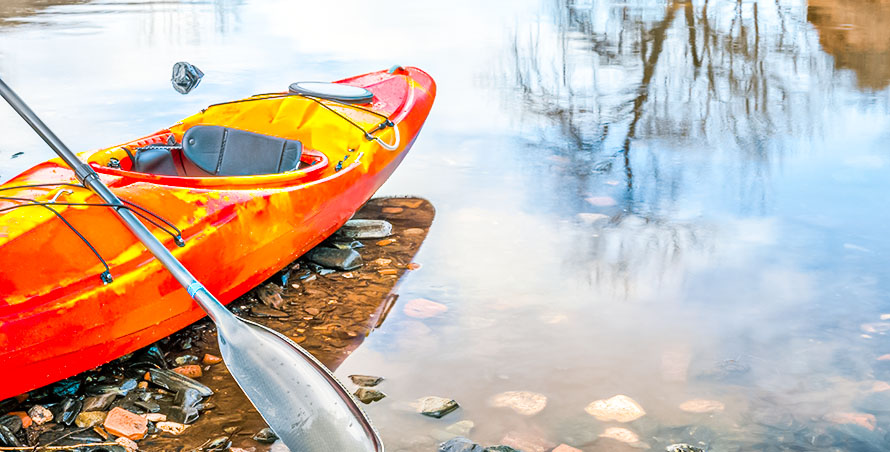 OK, it’s safe to come out now. Winter is over. Finally. And the season of healthy flows, wildlife migration, and better weather is in full swing.

When prolonged kayaking trips among humankind has left you wanting for a true wilderness experience, the Broughton Archipelago is a rewarding alternative to B.C.’s more popular touring locales. Just remember that you did, in fact, want wilderness. Broughton regulars have spent more time among killer whales and dolphins than their fellow two-footed brethren. Wolf and bear tracks are often sighted. For dialed-in kayakers with bomber rescue skills, it’s an unforgettable journey.

When to Go: July-August
Time: 4 days, plus 2 travel days from Vancouver

You know you’re in for a different kind of sojourn when you board the Queen of Prince Rupert for a six-hour, overnight ferry ride to the tiny Haida village of Skidegate on Moresby Island. The island’s First Nation culture and marine ecology is as deep as the ocean water that surrounds it. Gwaii Haanas National Park Reserve lies at the southern tip of Moresby. It’s such a compelling journey, you’ll forget about the steady rainfall.

When to Go: July-August Time: One week with a guide, two for independent parties

Local Persuasion: There are few places on earth that vibrate at a different frequency. This is one of those places that can reach out and touch you where you don’t normally get touched. The Haida people paddled these same waters in their dugout canoes. They ate the same fish. It’s a chance for you to feel somewhat as they felt.

Northwest kayakers are almost always just one paid holiday away from taking their next trip to Barkley Sound. Located on the west coast of Vancouver Island, Barkley is about an eight-hour trip from Seattle and is replete with protected water, exposed crossings, giant conifers, and, of course, prodigious rainfall that helps the towering trees grow as high as 100 feet. Humpback whales, and their entertaining fishing practices, have returned the last couple of years. They have largely been unseen in the area for nearly 100 years because of early 19th-century whaling practices.

When to Go: June-September Time: 5-7 days

Local Persuasion: There are a lot of old fishing campsites in the Deer Islands. There used to be processing facilities there, but that was banned eight or nine years ago. There’s great undeveloped camping, but you’re still in protected water. Remember your navigation skills, too, especially in August, which locals call “Fogust.”

No matter how many times you paddle among orcas, you never quite get used to the feeling of a six-ton killer whale that dives below the surface and heads toward your group. Johnstone Strait lies between Vancouver Island and the mainland. It offers tremendous views of the glaciated Coast Range to the east and the forested Vancouver Island Range to the west. There may not be a better place to paddle among the 200-plus orcas following salmon and searching for other food. You’ll just have to keep reminding yourself that they don’t confuse fiberglass for sealskin.

When to Go: July-September Time: 6 days

Local Persuasion: There are some strong tidal races in some passages, so make sure you take tide and current charts and a weather radio, an outfitter in the strait. Environmental Canada updates their forecasts every six hours.

Best Canoeing Locations in the USA

Forget the water level. Forget river beta. Forget nomenclature. Here’s the one thing to remember when you put on the eight-mile Section 4 run—go mid-week. This Class II-III run flows south through the Monominee Indian Reservation and offers reliable flow and some of Wisconsin’s best features. But that’s why everyone goes there, and why—if you’re from the Midwest—you’ll want to take the day off and enjoy the Class III Sullivan Falls practically to yourself. The river-wide seven-foot drop is best run left of center. Below Sullivan, watch the wildlife.

When to Go: May-August Time: One day

Local Persuasion: The Menominee tribe charges $25 for daily users. It is very frowned upon by boaters and the tribe to try to run it without a permit in White Lake. You’re on someone else’s property the whole time, and you have to abide by their rules.

In a state known better for its prodigious cornfields—and the occasional baseball fields carved into them—it might be one of the last places you’d expect to find canyons through which you can paddle. And yet this 110-mile river offers towering chimney rocks, limestone cliffs, and even fast-moving current. To get straight to the goods, put in at the Highway 139 bridge in Kendallville and paddle 31 delightful miles to Decorah.

When to Go: June-August Time: 2 days

Local Persuasion: The river meanders and has very tight turns. When you can’t see through the bends, stay on the inside in the slower water. If you’re in the faster water and you come upon a tree, you’re going to hit it.

Another Midwest gem, the spring-fed Blue River flows through the wooded hill country of southern Indiana. The 45-mile stretch from the U.S. 150 bridge in Fredericksburg to the State Route 62 bridge near the Harrison-Crawford State Forest is designated a State Scenic River. The river flows fairly quickly and dishes out some Class I riffles in spring and early summer. It slows down later in the season, giving you a chance to take your kids on a fun and relaxing wildlife-viewing trip where you can see deer, river otters, and hellbenders (large salamanders that only inhabit healthy streams).

Local Persuasion: Local canoeists feasted on a stellar 2006 season – with levels remaining high through July and are hoping for the same in 2007. If you look at all the streams in Indiana, this is by far the cleanest.

The quiet-water Section 1 is the most-paddled stretch of this river, but the fun meter surges upward on Sections 2 and 3. The 15-mile Section 2 starts as a mellow float before switching personalities and taking canoeists on eight miles of sustained rapids that push Class II+. The current slows at the Highway 13 bridge, and Sections 3’s easy rapids take you the rest of the way to Lake Superior, where the moody lake can be glassy or churning. Take out river-right at the sandy beach.

When to Go: May-August Time: 3 days

Local Persuasion: The Brule is one of a kind. Many people classify it as the best trout stream in the world because the water is so clean.

A river of rocks. The Piedra, which means stone in Spanish, flows out of the Weminuche Wilderness Area and cuts its way through two gorges as it heads south out of the mountains. The 10.5-mile Class II Upper Box offers busy technical rapids in a steep-sided canyon cloaked in fir trees. Warm up on the Upper Box, or if you’re ready to step up in difficulty, paddlers can plug into the more committed sheer-walled, nine-mile Lower Box (Class IV). This section is not for the claustrophobic or non-technical paddlers.

When to Go: May to mid-June for the best flows and warmer temperatures Time: 1 day

Local Persuasion: Check out the hot springs on river left near the end of the Lower Box run. These are also accessible from the trailhead on the shuttle road.

For those willing to earn their whitewater, descend the Chukar Trail 600 or more feet from the canyon rim to dip a blade into these cool, trout-filled waters. Dramatic canyon walls rise up and captivate paddlers, while technical rapids challenge intermediates in the middle section of the Class III-III+ run. If taking an overnight, settle under the stars in wide-open campsites around mile 8.

Local Persuasion: For the one-plus-mile hike in, rafters can hire horses and burros to assist with their gear through local packer.

Buckle up, cowboys and cowgirls. The Class III Upper Dolores is a fast-packed play run in a beautiful mountain valley. When the uphill snow melts, the three-mile Stampede Run charges to life with surf waves. Bedrock shelves create numerous fluffy and wide surf waves that give paddlers the sensation of paddling upstream to catch waves more than actually pointing downstream. Although most of the waves are too shallow for vertical moves, the surfing and spinning is unequaled.

When to Go: Good surf levels typically start in later April and run through the end of May. Time: Half a day or more if the level is right

Local Persuasion: Pull over near mile marker 29 on Highway 145 to get a look at the best surf action.

The free-flowing Animas courses through the heart of the western-flavored town of Durango and gives locals a stellar Class II-III after-work run. A gentle put-in near 32nd Street on the north end of town is a nice warmup before hitting the whitewater action on the south side. The Lower Animas climaxes at Smelter Rapid, the site of a permanent, year-round slalom course. Be sure to check out some real river nuttiness during the annual Animas River Days River Parade (June 1-3). If you have the Class V skills, the upper Animas harbors some of the state’s most impressive gorges.

When to Go: Mid-April to late-June for the best flows Time: 20-minute downriver sprint, two-hour, early-evening paddle, or a half day of park-and-play at Santa Rita Park

Local Persuasion: Be sure to check out the remodeled (completed in early 2007) playspots of Corner Pocket and Clock Tower Hole just below Smelter Rapid.